The La Vista Falls Golf Course is being transformed into Central Park, a new gathering place for La Vista residents to enjoy. The goal of Central Park is to create a new public space that will become a downtown destination for residents and visitors to the area.

Before developing concepts for Central Park, the City of La Vista worked with stakeholders during the design process. A working group was established to provide direction on the types of amenities residents would want within the Park. In addition to the working group, public meetings, city council workshops, and significant social media outreach was used to seek input on the adopted Vision 84 plan.

Activities at La Vista Falls Golf Course ended September 2016. Grading, which increases the depth and size of the lake, raises the outlet structure to provide additional water storage, and provides the preliminary grades for new improvements, is substantially complete. Trails have been constructed around the lake and the sanitary sewer relocation is complete.

*Timeline is subject to change. 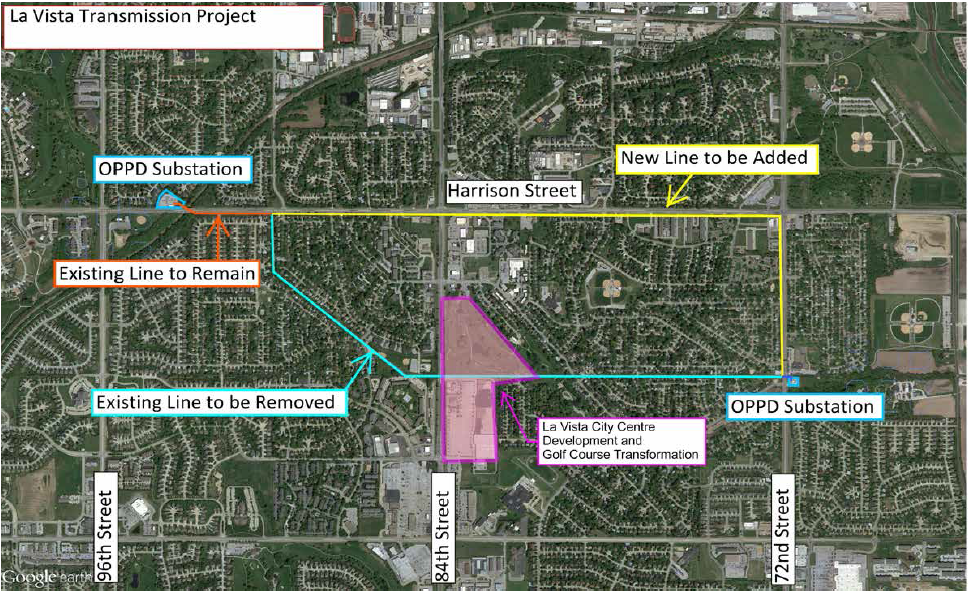 The City of La Vista and Omaha Public Power District worked together to enhance reliability and service surrounding La Vista’s economic development efforts, which have included the addition of a new City Centre that will increase visitors and revenue for the City.

An existing transmission line in the area has been replaced and repositioned, as shown on the map, to better serve businesses and residents. Infrastructure will accommodate current growth and ensure reliability for years to come.

If you have questions regarding the transmission relocation project, please send an email to LaVistaTransmissionProject@oppd.com and a team member will be in touch with you.